It's always tricky, trying to second-guess the weather. Early Saturday morning the sun was out. Then it wasn't. Then it rained. Hard.

But then it stopped and the sun came out again. Over the course of a few phone calls, we determined that rain would not be an issue and we should continue as planned. By the looks of the weather radar online, the whole thing had blown over, not to return.

When we got to Westside Alehouse about 4:00-4:30 the sun was shining. A little HUMID, maybe, but otherwise everything was fine. There was a small residual drip of water coming from the roof but it was no big deal. To be on the safe side, though, Sean brought some large plastic tarps, one of which we used to cover up the pile of empty guitar cases and a few other things behind the stage. Kept the other tarps handy, just in case, although none of us actually believed it would rain again. Got everything set up and by 7:00 we were ready to kick it off. 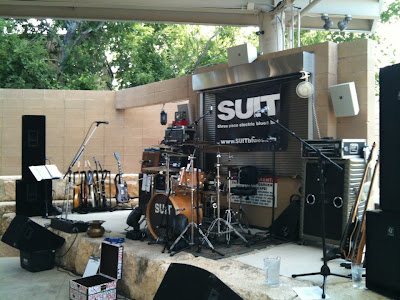 (This is actually a picture from the first time we played Westside Alehouse back in June, but you get the idea.)

By this time a pretty good crowd had assembled. Started the first song (Hound Dog Taylor's "Give Me Back My Wig," our usual opener) and we were off and running. And as far as I could tell, everything was going great. I don't recall any major train wrecks on our part, I'm pretty sure I got most of the words to the songs right, and I didn't play myself into any corners I couldn't get out of. But the best part was that the audience really seemed to be into it -- they were making all the right noises in all the right places and generally having a good time.

Finished the first set and after a short break launched into the second. Still no rain. Thomas "Tommy Z" Zoe sat in on harmonica on "It's My Own Fault," which our friend Grace captured on video so he could send it to his mom as a birthday present. A few songs later we played our version of Joe Bonamassa's version of an old Otis Rush song called "So Many Roads, So Many Trains." We had tried it the previous week at Junior's, but it didn't feel quite right; this time it worked out much better. Got a good crowd reaction, too. Very cool. Ended with another Hound Dog Taylor song, "She's Gone," complete with all the cheesy bits from me.

It was between the second and third sets, I think, that I noticed a little bit of fine mist in the air. Hardly enough to be called a sprinkle. I'm sure Sean and Bill saw it too, but none of us took it seriously. I took one of the extra tarps and covered my guitars, since the stand they were on (a five-guitar "rack") was outside of the covered area. The ones on individual stands -- my '75 SG and a funky old Del Rey as well as a lap steel -- I moved closer to the drums to be sure they were not exposed.

We pressed on. Sean's birthday had been just a few days before, so we did Junior Kimbrough's "Done Got Old" with Sean himself handling the intro vocal. Everything was still going great as far as we were concerned, and we kept on playing. But, somewhere along the way, that "fine mist" turned into more of a sprinkle, which turned into actual rain. I don't know about Bill or Sean, but I was oblivious to it until our friend John came up and said, "You wanna cover some of this up?" It was at that point I turned around, horrified, to find that the rain was streaming down on my secondary guitar amp (a late-50s Magnatone), which was just outside the area covered by the roof over the stage. Water was pooling up on it along with the two effect boxes sitting on top of it.

So we grabbed the tarps, covered up everything in the "wet zone" and kept playing.

It rained harder, but we still weren't ready to give up and stop. The show must go on, you know?


One of the PA speaker stacks was getting wet, so we moved it over a couple of feet and put a tarp over it. Pulled everything in as tight as we could to try to keep it dry. We agreed to see it we could make it through one more song -- Muddy Waters' classic "Mannish Boy" -- and call it quits. We got about one verse done when Sean's bass amp cut out. Stopped the song to investigate and it turned out water was infiltrating a power strip and tripping the GFCI breaker on the power outlet. Dumped the water out, dried the power strip off, plugged it back in and restored power to the amp.
And despite the ever-increasing rain, we picked up where we let off and kept going. We've got to finish this thing. It's a matter of principle now. I ran out in the middle of the audience, got up on a chair and did possibly the shortest version ever of my "repeat after me" routine. By this time the wind had come up and water was going everywhere. Everything was getting wet, including Bill's drums. We all knew it was time to stop. I ran back to the stage, yelled the short version of the "meaning of SUIT" rap into the water-soaked microphone and we ended the song.

Good night everybody, we're getting rained on up here, we gotta go. I seem to remember looking at my watch and seeing 10:15, but when I thought about it later that doesn't seem right, so to tell you the truth I'm not entirely sure what time it was. I just knew , as did Sean and Bill -- that we had to get this stuff out of the rain. Fast.

So we killed the power and started the mad scramble to get everything to a dry ground, which was pretty much the middle of the covered area. Fortunately, we had some help; John and and a few more friends helped us move everything.
Once all the stuff was out of the path of flying water, we were able to start the drying process, which involved a LOT of bar towels. It took a while, but we got everything as dry as we could and packed up.
And then, finally, just about the time we were ready to start loading out, the rain slacked off and stopped. Just like that. We loaded up as fast as we could and got out of there before any more rain started up again.

So we made it through. I still had quite a bit of guitar-cleaning and string-changing to be done, but as far as I can tell nothing suffered any permanent damage.

And you know what? Despite the rain and all the trouble it caused, it was still a really good night. People were SUPER generous with their contributions to the Tip-Toon (our tip jar is an old spittoon), and like I said, everybody really seemed to be digging what we were doing. One guy even said, "Y'all kept going a lot longer that I would have" and handed me a $20 bill.

So there you go. So far, we're liking this Westside Alehouse place. We've got another date booked there in November, so we'll see how it goes. Hopefully, it won't rain.

Until next time,
DV